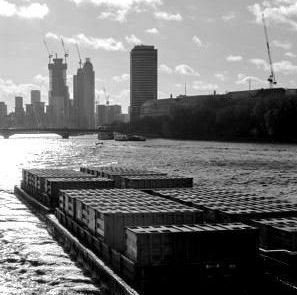 forward in using them by looking back to their original uses.

The Commercial Boat Operators Association, the Canal & River Trust, the Inland Waterways Association and the Port of London Authority are working together to kickstart what they believe will be a ‘revolution’ in the way that goods are transferred around the country.

The aim is to get more freight off roads, where traffic pollution is known to cause severe health problems in built-up areas, and onto freight carriers on the UK’s rivers and canals.

“The problem is we’re using 19th century infrastructure to solve 21st century problems,” said John Spencer, Director of GPS Marine, the largest multi-cargo intra-port barge operator on the River Thames and Medway, “but as an individual company we’ve been hitting our heads against a brick wall. We’re now working with major canal and river organisations to get this moving”.

The Port of London Authority has just launched a new consultation and vision for the Thames. The river is already the UK’s busiest inland waterway. Thames Vision 2050 identifies the development of Trading Thames as a priority, with strong long-term potential for using the river to connect the deep-sea port outside London with customers and consumers within London.

Between them, these organisations are approaching the Department for Transport, Defra and relevant select committees, aiming to deepen understanding of the opportunity and what needs to be done to make the most of it.